WE’RE THE GUARDIANS, MEN WHO DO WHATEVER IT TAKES TO BRING OUR RESCUES HOME. 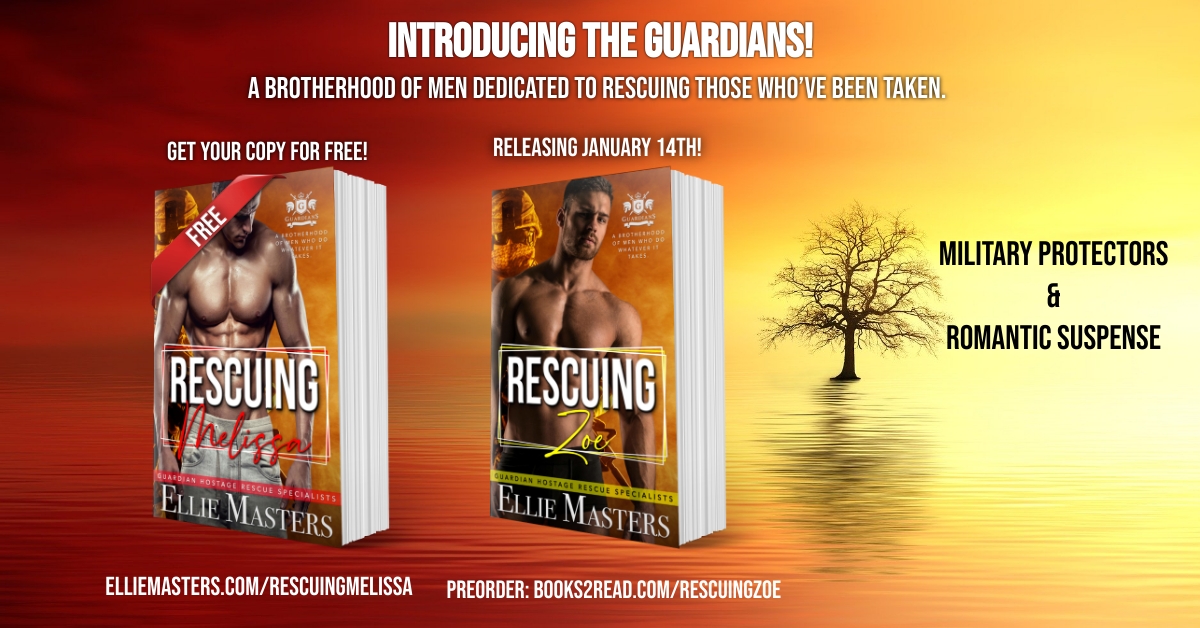 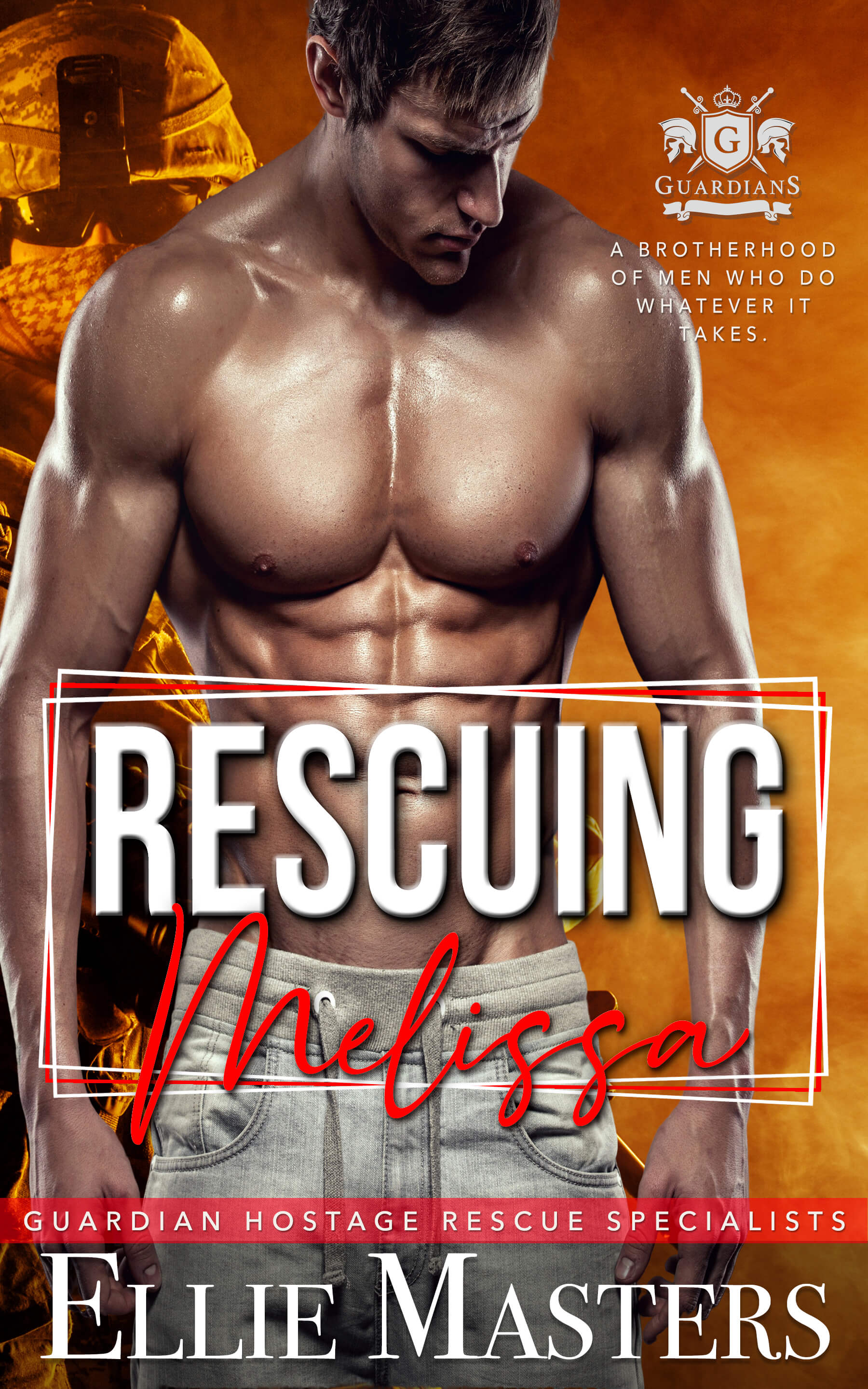 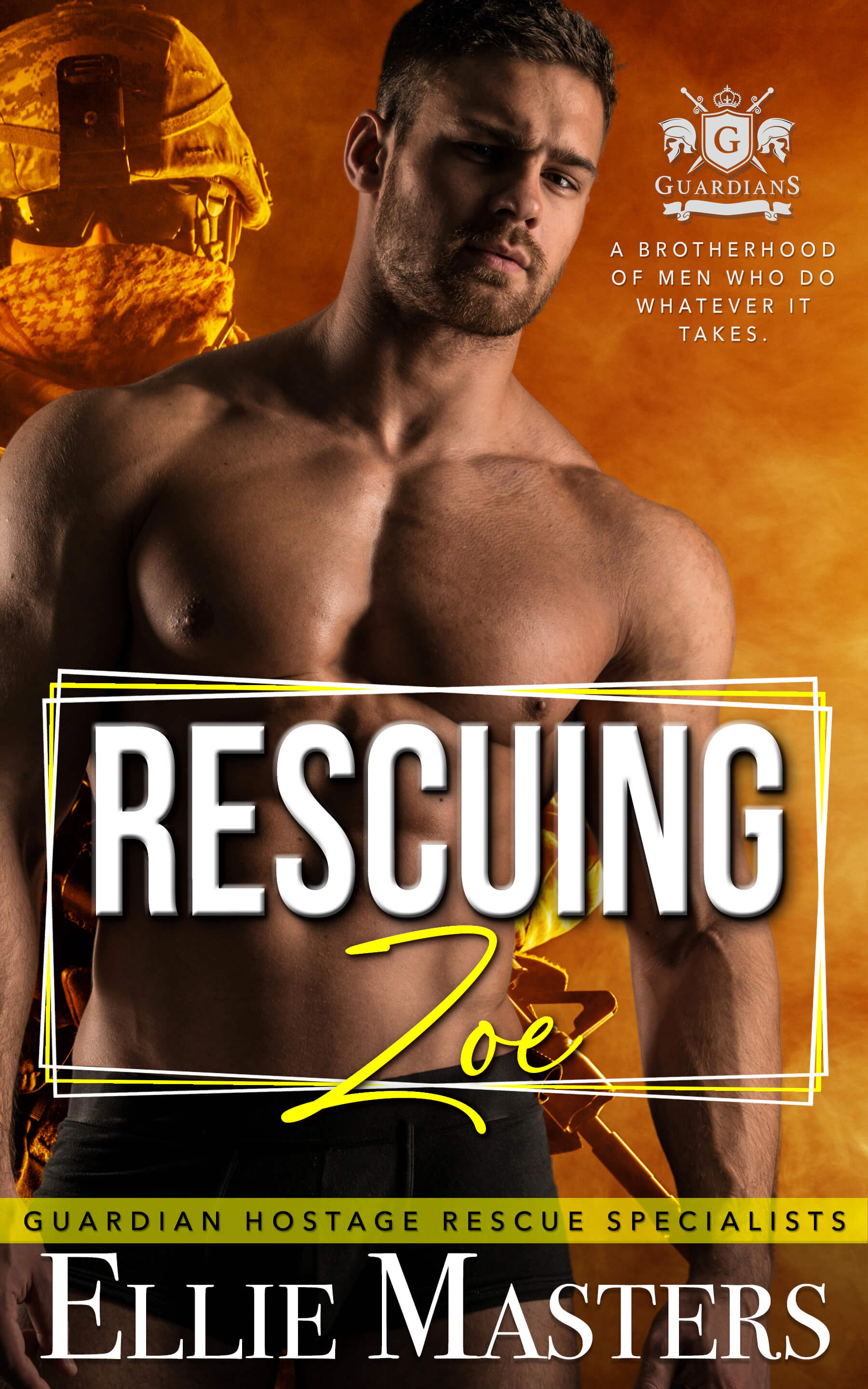 They’ll have to fight for their happily ever after…
Rescuing Zoe is a fast-paced, steamy, contemporary, military, romantic suspense that will tug at your heartstrings and leave your heart racing.

My best friend’s little sister is missing, kidnapped off the streets of Cancun.

He needs my special skill set to bring her home.

A former Navy SEAL, I’m now a Guardian, a brotherhood of men dedicated to rescuing those who’ve been taken.

Rescuing Zoe should be just another job, but Zoe and I share a history.

One her brother doesn’t know about.

She’s been in love with me since she was five.

It began as an annoyance, but a year ago I set her straight.

She crawled into my bed and I broke her heart.

Now, I’ll do anything to rescue Zoe and bring her home.

If you love over the top alphas, military men that like to take charge, steamy couples, and happily ever afters, Rescuing Zoe is for you. Drop your inhibitions at the door. You won’t be needing them anyway. Rescuing Zoe is book 1 in the Guardian HRS series. All books are contemporary standalone, steamy military romances, with arrogant alpha male heroes, the smart, feisty heroine who steals his heart and each has their own Happily Ever After (HEA). Grab your copy today and let the binge-reading begin!

Escape inside your next great read!

Once upon a time, there was a girl.

Who didn’t believe nightmares were real.

But the girl woke up

Trapped in a living nightmare.

That girl is me.

It’s been two days since they added the last girl. Eve arrived much as we all did, struggling, snarling, and full of fight. She survived her first beating. She’s quiet now. Recovering from her injuries. Now, she whimpers and cries, just like the rest of us.

In the oppressive silence and cloying blackness, which smothers all hope, we’re not ready to die. And while nobody knows where we are, or where we’re going, we are headed somewhere.

We’re fed, watered, and they remove the foul-smelling bucket of waste once a day. I think. Measuring time is difficult, but we know one thing. They want us alive when we get to wherever it is they’re taking us.

To monsters who wait for us.

To the beginning of a living hell.

After Eve’s arrival, the metal floor of our prison vibrated. A low, persistent drone shook the shipping container. Sometime later, hours maybe—it’s hard to tell how much time passes in here—a soft up and down, side to side, rolling motion confirms our fears. We’re being shipped to the next destination in our descent into hell.

The days pass with the relentless march of time. We can’t stop it, slow it, or reverse it. Minutes last hours, hours last days, and the world no longer makes sense. With only suffocating darkness to pass the time, I lose more and more of my sanity with each passing day.

My fingers plait a tiny braid. I make one for each day, or at least I think the time between one opening of the shipping container and the next is one day. It’s when they feed us and water us like the animals we’ve become.

There are ten braids now.

A loud bang sounds, and I nearly jump out of my skin.

I scurry back, not wanting them to touch me, to hurt me. Three girls got too close. They were dragged out. None returned. Thirteen of us remain, shadows of our former selves.

When the doors open, all we see is darkness. What little light there is from the moon filters down through stacked shipping containers, to cast shadows upon shadows. I prefer the formless blackness to the shifting shadows. They don’t open the door during the daytime. It’s always night.

A hand reaches in and removes the waste bucket. Footsteps recede while someone else places a large bowl of water just inside. We wait for the man with the bucket to return and toss it back inside. Covered in filth and grime, the bucket no longer bothers me.

When water comes, no one touches it. We fear what might be in it more than we fear dying of thirst.

We wait until the doors close. Until the metallic thunk of the locking lugs tells us we’re once again locked inside our stifling prison.

Only then do we move.

One girl finds the bowl in the blinding darkness.

One girl takes a sip.

If she doesn’t pass out from whatever drug they may have laced it with, we share the water. Small sips that do nothing to quench our thirst.

But it keeps us alive.

We survive together, thirteen girls bonded by a nightmare.

Each girl takes her turn to test the water.

I lift my head from my knees and reach for the bowl. Dipping my finger into its contents, I croak out a scratchy, “W-water.” There is no food. Gnawing hunger claws at my belly, but it’s thirst that drives me.

Sighs sound all around me in the dismal darkness. It’s been too long without water. The only thing carrying me through, the only reason I hold onto hope, is that I believe we’re more valuable alive than dead. I know what fate awaits us. We all know. But it’s still better than death.

I take a long pull, swallowing water down a scratchy throat, which still hurts from all the screaming during my abduction. It feels as if I broke something inside because my voice is nothing but a breathy whisper now.

As the first girl, I’ll drink more than the rest. That way, the drug, if it’s there, will be more likely to take effect on me, thus saving the others. I scoot back against the wall and slide the bowl to Bree. She came the day after I arrived. Our fingers interlock as I tip my head back to wait.

Then we’ll wait for the door to open again.

We don’t have the strength to fight. Not that I’ll waste my energy on these men. I’m saving mine for the real monsters to come.

Not sure if my eyes are open or closed, fetid darkness folds around me. My thoughts wander, like they do every hour of every day, to the last moment I was happy.

I don’t focus on the men who snatched me off the street.

Instead, my thoughts go to the brilliant-blue skies and white sand beaches of Cancun. Crystal-clear, tropical waters sparkle beneath a bright sun. The festive spring break party atmosphere lets a smart girl lower her guard.

I lost my freedom in the span of a heartbeat, on my very first night in paradise.

I thought I could walk from the beach to our hotel by myself. I gave no thought to the vulnerability of a pretty, young girl walking alone. I didn’t think I was alone. People were all around me, partying, with far too much liquor flowing in their veins.

But I was separated from the crowd. They yanked me into a filthy van. Took me to a filthy house on a filthy street. There I was stripped, examined, and left to huddle on a filthy floor with a filthy flea-infested blanket. Then they shoved me inside a filthy shipping container twenty feet long with ten other girls.

Has it really been ten days? The braids in my hair don’t lie.

What are my friends doing now? Did they call the police? Do Mexican police care about American girls who disappear? Or do they think I got drunk and passed out in some foreign bed with some nameless boy?

I’ll never know. Austin must be going ballistic, worrying about me. My overly protective brother will not stop until I’m found. And my father? He’ll do whatever it takes to bring me home. I cling to hope, even knowing how desperate that makes me.

“How do you feel?” Bree keeps her breathy voice soft. We aren’t allowed to speak to one another. That freedom, among many things, was violently taken from us.

“Good so fa…” I struggle to complete my thought as darkness overtakes me. My eyes droop. My muscles relax.

Hands reach for me and drag me over a rough metal floor as I dream of a happy, vibrant girl who doesn’t believe in nightmares.